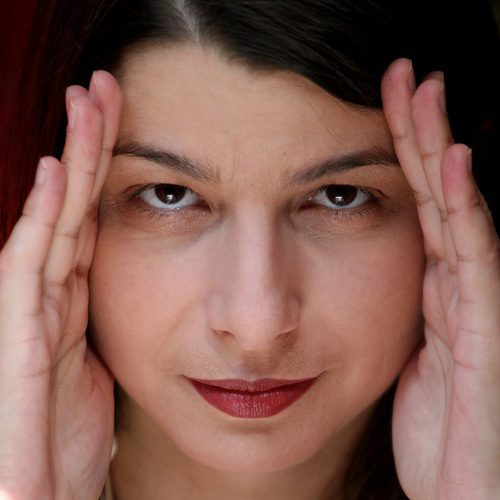 Neli Mitewa graduated in Fashion Design from the University of Applied Sciences and Design in Trier, Germany. She develops her own collections under the “nelmit” brand. She also works as a freelance designer, in the field of teaching (with experience as a professor of fashion design at AMD Akademie Mode & Design Munich), consulting on design concepts, fashion journalism and costume design.

The awards she won at international competitions include the Design-Innovation Award of the Ministry of Economy of North Rhine-Westphalia, the qualifications for the finals of the Smirnoff Fashion Awards, of the GRAND PRIX INTERNATIONAL FASHION DESIGN BERLIN 2003, etc. In 2007 and 2009, GRAZIA magazine nominated her for „Woman of the Year“ in the Design category.

In 2007, Neli created IVAN ASEN 22 as a conceptual platform for presenting young progressive fashion designers in Sofia, and in 2009 she founded the IVAN ASEN 22 Foundation for presenting and supporting contemporary designers and is its artistic director and curator.
In her collections, she is interested in the transformability of form (“GAME-à-porter”), the telling of personal stories through clothing (“Watch your Back”), as well as multicultural intertwining (“Culture Clash” ). Characteristic of her work as a designer is her own modeling technique and her experimental construction systems.

Since 2015 she has been focusing her interests on conceptual fashion and its role in the context of contemporary arts.

In 2018, Neli Mitewa was awarded the “BIG SEE INSPIRATIONAL-VISIONARY AWARD”, provided by Zavod BIG, Center for Creative Economics of Southeast Europe in Ljubljana, Slovenia, for her achievements in the development of the Southeast European design scene.

We use cookies on our website to give you the most relevant experience by remembering your preferences and repeat visits. By clicking “Accept All”, you consent to the use of ALL the cookies. However, you may visit "Cookie Settings" to provide a controlled consent.
Cookie SettingsAccept All
Manage consent

This website uses cookies to improve your experience while you navigate through the website. Out of these, the cookies that are categorized as necessary are stored on your browser as they are essential for the working of basic functionalities of the website. We also use third-party cookies that help us analyze and understand how you use this website. These cookies will be stored in your browser only with your consent. You also have the option to opt-out of these cookies. But opting out of some of these cookies may affect your browsing experience.
Necessary Always Enabled
Necessary cookies are absolutely essential for the website to function properly. These cookies ensure basic functionalities and security features of the website, anonymously.
Functional
Functional cookies help to perform certain functionalities like sharing the content of the website on social media platforms, collect feedbacks, and other third-party features.
Performance
Performance cookies are used to understand and analyze the key performance indexes of the website which helps in delivering a better user experience for the visitors.
Analytics
Analytical cookies are used to understand how visitors interact with the website. These cookies help provide information on metrics the number of visitors, bounce rate, traffic source, etc.
Advertisement
Advertisement cookies are used to provide visitors with relevant ads and marketing campaigns. These cookies track visitors across websites and collect information to provide customized ads.
Others
Other uncategorized cookies are those that are being analyzed and have not been classified into a category as yet.
SAVE & ACCEPT
Powered by